What a difference 3.5 years make 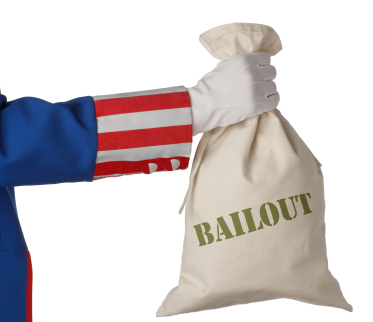 You may recall – unless you've repressed it – that at about this time 4 years ago, our economy was going you-know-where in a handbasket. Think bailouts, bankruptcies, collapses, more bailouts, mass layoffs, home foreclosures, a presidential election, more bailout requests delivered by men in private jets, etc.

And finally don't forget the Toxic Asset Relief Program, better known as TARP, in which $700 million or so were doled out to banks, fiscally sound and not so much, to relieve them of unpaid mortgages and loans, to get the economy flowing again. (Those dollars have mostly been returned to the federal government with interest, by the way.)

Kind of gives you the chills to think about it again, huh?

The connection to sponsorship? As you may recall just after all that juiciness, in February 2009, members of Congress went ballistic when a very fiscally sound bank that reluctantly received TARP dollars (at the government's request) moved forward with the second year of its five-year sponsorship agreement with the PGA. I wrote about it in my book, How to Jump-start Your Sponsorship Strategy in Tough Times, if you'd like to learn more. "Return the money!"  "How dare you!" "I'm introducing legsilation!" "No sponsorship for companies receiving TARP dollars." The bank became the strawman for "corporate excess," sending event producers who rely on sponsorship dollars into a tailspin, because corporation after corporation cancelled sponsorship investments.

On Sunday, the Philadelphia Inquirer reported on the lavish sponsorship of the two political conventions, calling the increasingly elaborate parties – that congressman railed against less than 4 years ago – "an influence arms race."

For the record, I don't have an issue with these sponsorhip investments or executions. Sponsorship is a powerful medium that works, so why shouldn't the political machinery exploit the possibilities to raise money they need. I'd prefer to know that my tax dollars are paying for something like the national parks system.

I do have a problem with the hypocrisy in our political system. The congresspeople who were practically apoplectic in 2009 caused severe economic damage to nonprofit organizations reliant on sponsorship, the meetings and travel industry, and event producers of all stripes all across the country. Now sponsorship of the two political conventions is A-OK.

Apparently politicians haven't heard that we individuals prefer and expect greater transparency. Also, how sad this is what it's come to. Corporations have to buy influence and relationship-building through parties at these two media spectacles.

Posted by Gail Bower on Wednesday, September 12, 2012 in Books | Permalink