Saluting Dunkin' Donuts and the Troops

My friend and colleague Joe Brooks, president & COO of the USO of Pennsylvania & Southern New Jersey, writes in with details of a great partnership his organization has with Dunkin' Donuts. If you're in Philadelphia, tune in to Fox tomorrow morning, Veteran's Day, at 7:15 to see Joe in action. In the meantime, here's what Joe has to say: 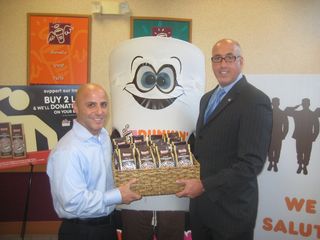 With 6 ABC covering the event this morning, DD’s Louis Conte, left, presented [Joe Brooks of] Liberty USO with an initial donation of 250 pounds of coffee. Today’s donation is a small gesture towards a much larger donation to come at the conclusion of the promotion. 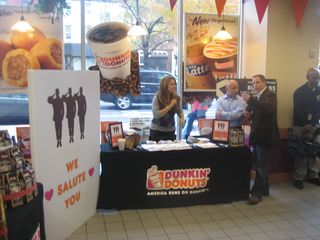 The event, held at their 1500 Spring Garden St. location, also generated dozens of “Thank You” cards signed by customers appreciative of the protection our armed forces provide to us. The cards will be shipped to troops as part of a holiday care package program we’re undertaking with the support of Lockheed Martin.

The same scene will play out again tomorrow morning outside of Fox 29’s studios as Liberty USO and Dunkin Donuts will ask the general public to again sign the cards. In addition, I will be interviewed at 7:15 a.m. to talk about the DD promotion and of course the USO!

As a reminder the program offers a wonderful benefit to our troops:

The promotion has generated awareness of Liberty USO, will raise the morale of our troops via the Thank You cards, provide care to these same troops from the coffee donation and further advances Liberty USO as a strong promotional partner.