« Getting and Keeping Sponsors When Times Are Tough - Sponsorship Strategy in a Recession | Main | Nonprofit Leaders: How much do your marketing communications mistakes cost? »

The case for sponsorship strategy

On my morning walk today, this little piggy stopped me in my tracks. 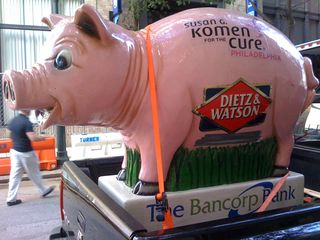 (And don't worry. It's actually not nibbling on that man's head; no humans were injured in the taking of this photo.)

I don't know where this little piggy was heading (though I hope home), how it will be used, nor what the business goals could possibly be. But symbolically this is a disaster and a sure sign that sponsorship strategy is missing.

The Susan G. Komen Fund has done an exceptional job at not only raising awareness levels but also engaging individuals and businesses, emotionally and financially, through the power of pink. In fact, in her new book, due out tomorrow, Nancy Brinker, who founded the Komen Fund, honoring a promise to her sister Susan who succumbed to breast cancer, credits corporate sponsorship and the way the organization leveraged partnerships with the corporate sector for the organization's early success. An article in yesterday's Dallas Morning News is worth the read, especially if you're wondering about the power of sponsorship for your cause or organization.

The article and readers' comments reference the the pink 'naysayers.' With all due respect and admiration for all Komen has accomplished, I am one of them. There is such a thing as overdoing something, and we've reached that point with pink. I've commented before that while Komen harnesses individuals' energy, emotions, and passion in outstanding ways, Komen does not represent a stand-out opportunity for sponsors. Pink is overdone; people have pink fatigue.

Here's why I think it's no longer effective. Like everyone these days, I have a lot on my mind. I'm a pretty big picture person, but sometimes life is all about the details. I have several systems for helping me keep track of them all, honed over my adult life time. The biggest key I've found to getting me to remember something, no matter how important, is to create a new habit (like getting a mammogram every year) or doing or placing something where I don't expect it. For example, I'll put a video to be returned on the floor in front of the front door. It's not supposed to be there, so it gets my attention.

When the pink ribbons started to hit the street, they were novel and powerful. Now they – and every other color and pattern of ribbon – are everywhere. Enough with the ribbons already. They don't remind us of anything except how mainstream and banal they are. Our eyes glaze over.

Komen, of course, thinks otherwise. More pink – or engaging more women to protect their health, more businesses from which to generate more revenue, etc. - is needed, Brinker notes in the article. They've recently begun alliances with some odd partners, such as KFC in the Buckets for a Cure promotion even though Komen's web site references the link between obesity and high risk of cancer. Komen's director of global corporate relations defends the partnership as a way to reach more people, especially those who are at higher risk who could really benefit.

Another partnership is with the Dallas Cowboys, described in the article above as a $1 million promotional partnership. While I'm not sure how the Cowboys will sell more tickets or gain more viewers through their investment, I do find the pairing interesting. And the commonality in both partnerships, with KFC and the Dallas team, is that they both stand out as unusual, which gets our attention. Besides reaching women fans, the Cowboys can raise awareness for men's breast cancer and the need for loving support from and for the men whose lives are touched by women's breast cancer.

The KFC partnership would work better for me if no product or only a healthier product sales were tied to the message. Instead, Bucket buyers are encouraged to buy just the food – and bucket loads of it – that could do them in. That doesn't sound like a Cure to me.

Nevertheless, perhaps an evolution is beginning to take shape for Komen. With the organization's scale and clout internationally, is Komen poised to take another step in making real and permanent change in the lives of women? If so, the strategy involving pink and ribbons also will have to evolve so we take notice. And it should definitely not include a pink pig.

Like KFC, where could the association with Deitz & Watson, a pink pig, and Komen possibly be going? Ham for a cure? BLTs for a cure? I hope there are messages about healthy eating choices, like maybe a low-sodium Deitz & Watson offering.

I get the association between piggy banks and banking, and indeed this piggy is intended to be a piggy bank, real or symbolically. However, after all we've been through during the recession, is this the right image? Here are some messages underlying the symbol:

When you engage in corporate sponsorship, either as a property and rights holder or as a sponsor, you must develop a strategy. Without it, you run the risk of sending the wrong messages.